After we said farewell to Ben our awesome trip leader, we flew off to Lima via Quito.  The pace was starting to play havoc with our brains by then, during our layover at Quito airport at least two of us thought we were already in Lima. Our lovely guide Ximena met us that evening at Lima airport, then took us on a fascinating cultural tour of Lima the next day. After changing some of our USD to Peruvian Sol, we took in the architecture of downtown Lima and the catacombs of San Francisco Monastery.  We weren’t allowed into the Cathedral for security reasons because the rather unpopular president was in there celebrating mass. 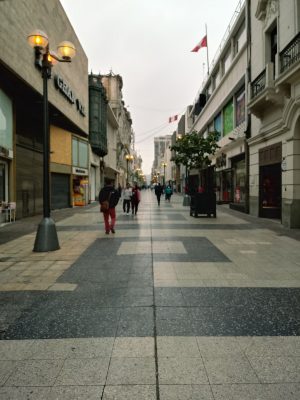 We ended up at the Larco Museum which was so good I abandoned the tour there and made my own way back to the hotel four hours later.  I was in nerd heaven looking at artifacts from the last two or three thousand years, while the less nerdy travellers relaxed in the hotel bar for the afternoon. 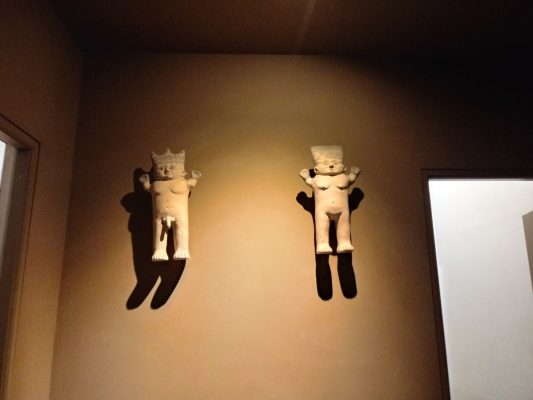 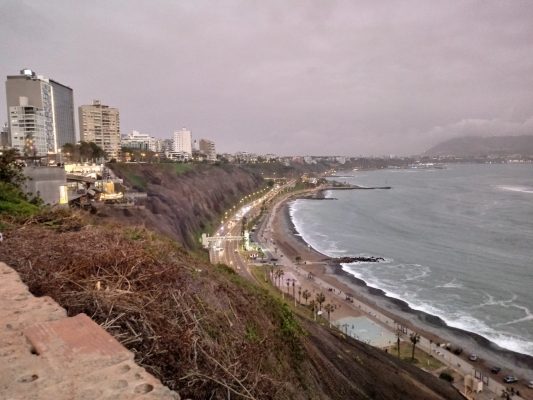 Walked to the waterfront district for dinner, the ceviche was to die for!  The view was pretty impressive too. 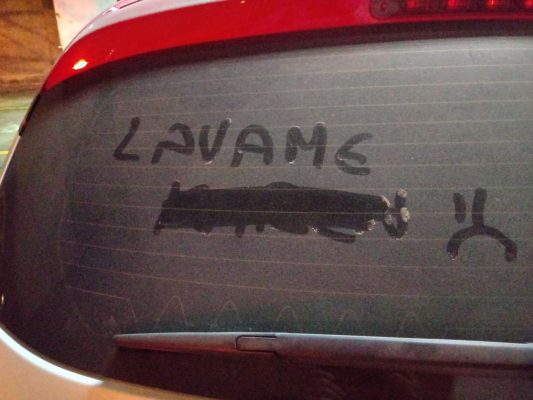 Stopped into a café for the world’s best hot chocolate on the way back to the hotel. In the carpark next to the café I found that some things don’t change the world over.

After a short flight to Cusco, we checked into the beautiful Taypikala Hotel.  It was in a small laneway up a very gentle hill that had me breathing to rival Puffing Billy – yes the altitude got me.  The others spent the afternoon exploring, I went to bed and waited to acclimatise.  Next day was a tour of Cusco town and Incan ruins with our awesome guide Max. 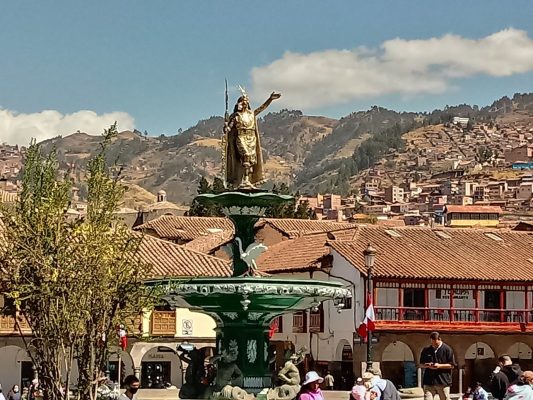 The syncretism in the cathedral was really fascinating, and the town square was lovely.  Back to bed for the afternoon to acclimatise some more while the others pottered around the town.

I seemed to have acclimatised much better by the next day, which took us to the living ruins of Ollantaytambo (our guide’s home town) and the Pisac market.  We learned all about the quality of Peruvian silver and baby alpaca cloth and how to recognise it; we then put our knowledge to work buying souvenirs for our loved ones.  We were also invited to view a traditional Incan-style modern residence complete with guinea pig livestock enclosure. 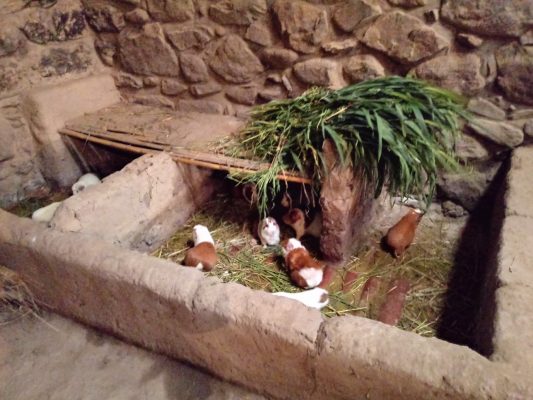 Some of us tried guinea pig in a restaurant in Cusco later on, it was delicious.  Tasted like a cross between duck and lamb.  I did wimp out and request it be served without the head though.

One of several occasions where it would have been really useful to have at least some Spanish was buying a birthday card for my aunt, thought she would be tickled pink to receive one from Peru.  With one or two mangled Spanish words, a lot of mime and some very patient shopkeepers I managed to buy one and send it; probably gave the shopkeepers a laugh too.

Fortunately by the time the big day came my altitude tolerance was pretty well sorted.  It was a long trip to Machu Picchu from Cusco, involving two buses and a train, with switchbacks and hairpin bends.  Machu Picchu itself was amazing: the architecture needed for the mountainous location; the stone walls with irregular shaped stone blocks with no mortar to hold them together; the scale of the terraces; the precision of the windows in the Sun Temple lining up the sun’s rays with the mountains at summer and winter solstices; the snorting llamas striking strange poses to get that last niggling itch; the precariousness of the original stairs… words can’t do it justice. 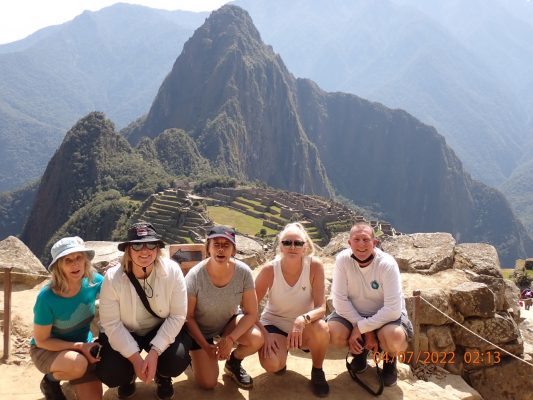 To top it off, we got a dance and fashion show on the train on the way home. 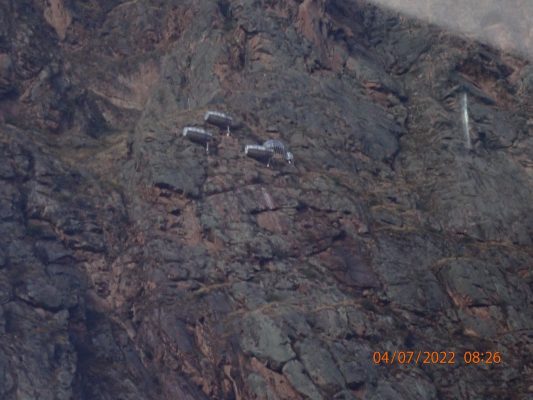 We also got to marvel at the idea that anybody would stay in the Skylodge pods we saw en route – you have to climb the cliff for several hundred metres then sleep or eat in the pods hanging off the side of the cliffs by cables. (Look closely at the photo above).

We got into Santiago tired, stressed and apprehensive, what with arriving after midnight, random luggage restrictions by LATAM airlines, random location of said luggage by said %#%#$ airline, random customs requirements, and waiting for random PCR test results.  But Jorge our lovely tour guide took us grumpy bastards in his stride and soothed our ruffled feathers like an expert.  After a few hours of sleep we were up bright and early (or an approximation thereof) for our tour of Valparaiso and Vina Del Mar, the coastal playground of Santiago.  Valparaiso was very steep and full of murals, cobblestones and beautiful buildings (also unfortunately doggie doos – if only there was a way to put corks in all the free-range dogs). 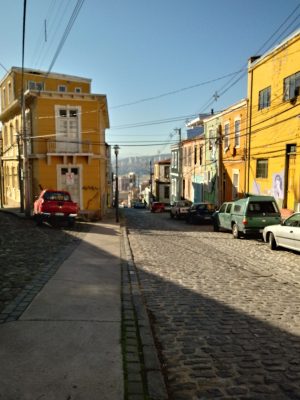 We browsed an art gallery known as the “lying house” – so named because we entered from street level, went through two rooms, then found that the back window was about 4 storeys high. 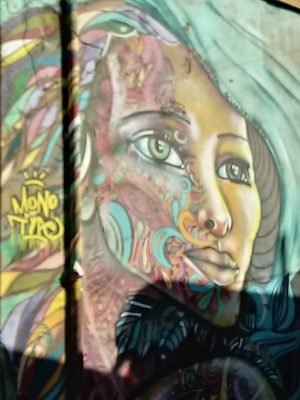 After a lovely lunch (ceviche for me! What else?) at Vina Del Mar and a look at one of the few moai outside of Rapa Nui, we headed back to our hotel, where we were overjoyed to find a negative PCR test and found luggage.  We celebrated with a bottle of Chilean Cab Sav, the best cab sav I have ever tasted. 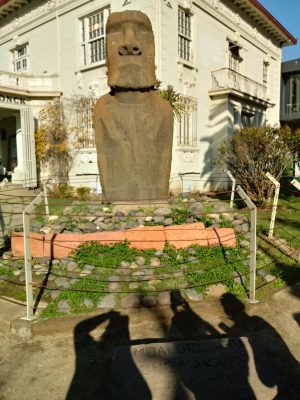 We spent the last day walking around Santiago on a freezing cold day, changed our USD for Chilean pesos, took the cable car up to the Virgin Mary Sanctuary, and took in the view of Santiago until the clouds covered it. 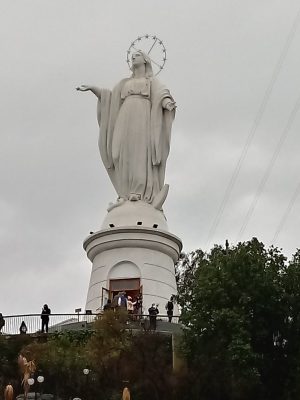 Bought a newspaper from a vendor who got points for honesty by returning the extra 1000 peso note I gave him by mistake.  Then a leisurely dinner and off to the airport for our last wrangle with LATAM airlines for the Santiago to Auckland leg of our journey home.  A sleep, a couple of movies then back to the comforts of Qantas for the Melbourne to Auckland leg.
Our group parted with hugs at Melbourne airport for our trips home, looking forward to seeing our respective furry and non-furry loved ones after three weeks and talking their ears off about the trip of a lifetime.

A week later, my family and friends have heard allll about my trip now. Where can I get an ear in a cage?