April 2014 has flown by with for the first time in a long time, above average rainfall during that month.

The increased rainfall has had an immediate yet short lived effect on visibility with a noticeable greenish tinge encountered on shore dives in shallow water, especially areas that can be somewhat affected by storm water run-off.

The change in weather has also seen a slow and gradual drop in water temperatures with the computer now telling me that we are hovering between 17 and 18 degrees C.

With the temperature dropping, divers are starting to talk about drysuits, hence our club event, tomorrow,  May 2nd and the release of the much anticipated SCUBAPRO Evertec Tri-laminate shell suit and its first appearance in Australia at SCUBA CULTURE.

April 5 featured our inaugural and mega successful “BLOKES DAY” with a bus and trailer picking up a full contingent of divers and dive gear from all levels of experience, all walks of life getting together for a fun dive at South Chanel Fort followed by a lunch and a few beers at the Mornington Brewery. 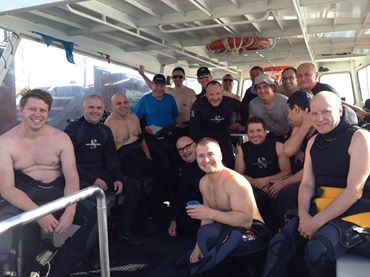 By the end of the day, I was totally stoked by the level of support for this event from the “ Blokes”  and their request for this to happen more often… Who am I to argue? I had an absolute blast and can’t wait to do it all over again.  Next time we might dive Flinders or if possible the Blow-Hole then do a wine tasting and lunch somewhere around Red Hill…. Any thoughts guys?